To simplify things, you need to consider what can be eliminated without having much significant effect on the end result.

Since 30 min is needed for measuring the strength of individual moves, yet the 1H is best for the Green River and the 2H LEMA, there is a possibility of making a Hybrid “30” minute chart.

The first thing to do is to eliminate the 30 Minute LEMA itself.

The price location VS the LEMA channels can determine among three kinds of markets.

1. Above the 3 LEMA channels. Trending market. Buy dip – either an ABC or 3 pushes lower based on the strength of the qualifying push down.

2. Tangled: price is between two LEMAs. Here reversals are abound, things are range bound and it is hard to see clearly.

3. Below the 3 LEMA channels. Trending market. Sell rip – either an ABC or 3 pushes higher based on the strength of the qualifying push up.

For obvious reasons you should be looking for a pair in trending mode.

The white streaks are the Daily LEMA. Helps with getting a further idea of price location on the big picture. To anticipate a reversal, price has to get on the other side of the Green River (which is the 15-min LEMA here).

I have left the maggots in, if you don’t want them displayed, simply set the blacks and the yellows to clrNONE. 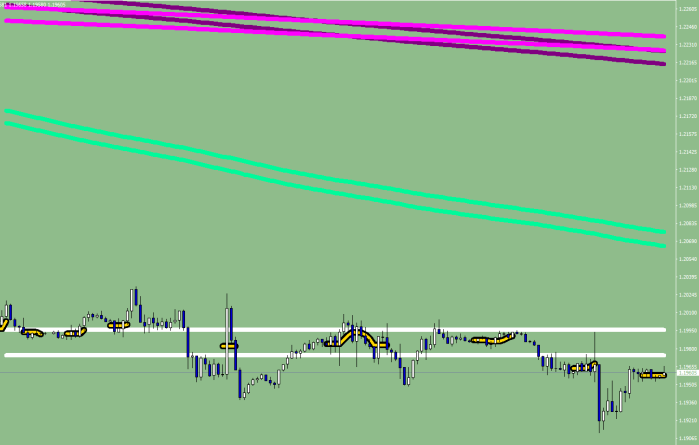 GBPUSD on the same gauge:

This would mean that GBP is somewhat stronger than EUR, yes.

USDCHF is also trending, but in the opposite direction.

This means that CHF is weaker (white lines) than the EUR and the GBP.

GBPCHF is tangled, it is not clear if the GREEN river or the 2H LEMA is gonna get touched first. A reaction from either of these would be likely though. 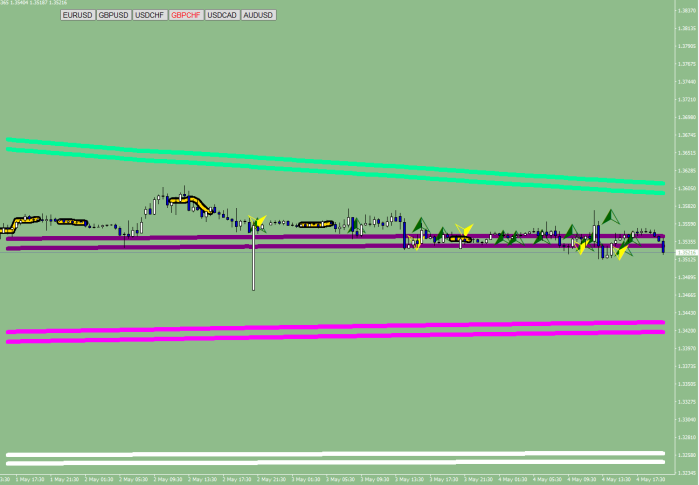 USDCAD is making weak bounces off the Green River.

It is trending higher, but not with much conviction, and too many touches means that eventually it would crack below it.

I shall let you do the analysis on AUD/USD.

The current divergence interpreter that I use can be downloaded from the previous post. It is calibrated mainly for the EUR/USD, but may work well on other USD pairs too.

Again, you can set the things you don’t want displayed to No Color.

Below there are some examples for timing your entry based on the qualifying move’s strength.

When there is a halfway spike for the first move (green horizontal arrows), you can sell the second move up, or the C in the deeply overbought field – and aim for a lower low (green vertical arrows).

When the qualifying move goes too strong, you end up with two more waves following it up, so your sell would be a Wave 5, and your aim cannot be a lower low either.

There are other nuances, such as the qualifying push cannot come from too high (merely oversold or worse. 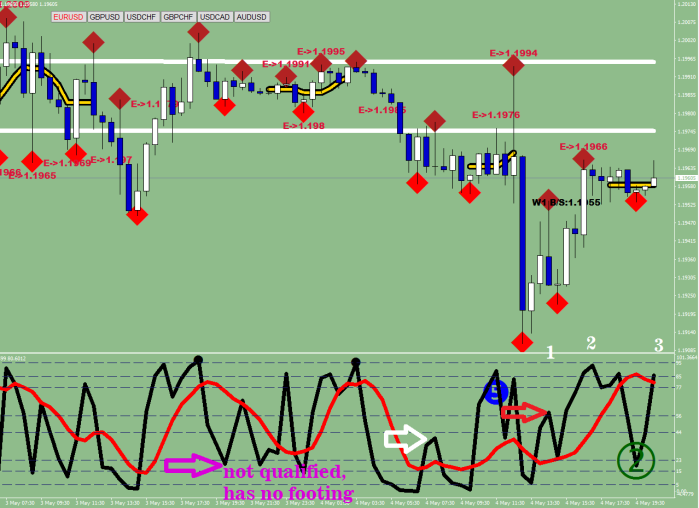 The one I marked as not qualified resulted in 3 pushes up, that went nowhere, so it is close to a regular red marker.

The one with the white mark is merely a reaction, not qualified either. It is a double pump (that results in an “h”) and cannot be broken for a while unless a short covering, quick run follows (which by the way would result in a new, lower low).

The current, red push up is just a little stronger than it should be for an ABC, and there was a moment (30 min) of hesitation before the thrust, either way, the bulls’ three little wishes are either already over with or would be very soon.

Homework: should you be expecting a lower low?